A City Break in Valletta 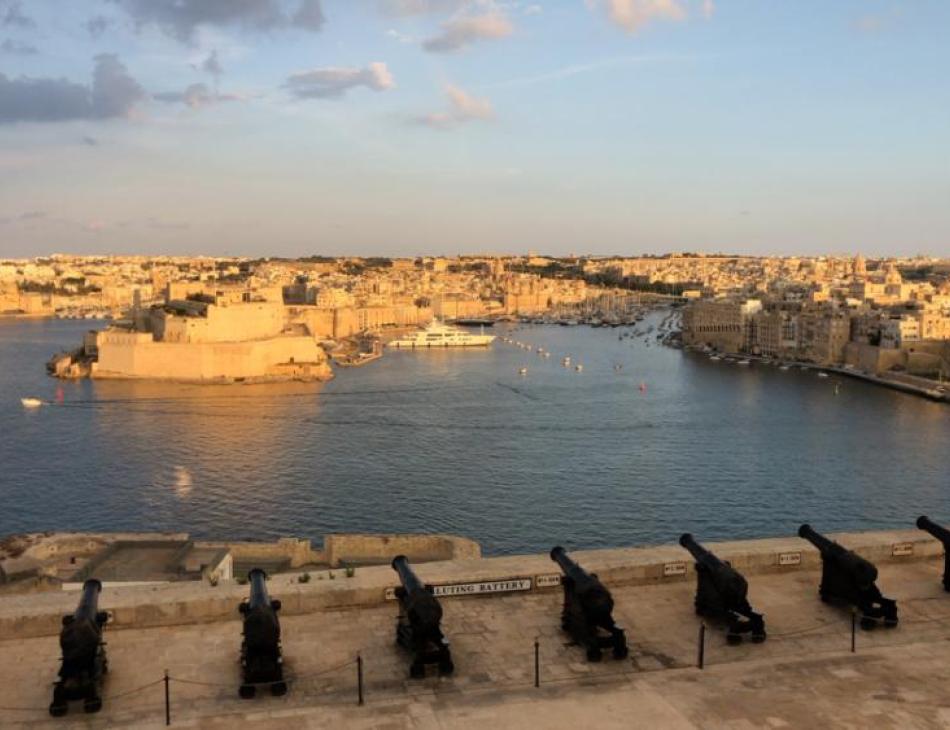 My memories of Valletta from teenage family holidays to Malta in the '70s are of a noisy, chaotic place where it was nigh on impossible to park and, to my young mind at least, full of boring, dusty looking old buildings. How blind I was to its charms back then!  So I was delighted on a recent, post Covid, visit to have my outdated misconceptions shattered as I explored what this vibrant capital, the smallest in the EU, now offers.

It is no surprise that the city has seen many changes over the past 40 years but, physically and most notably so in the past decade, the City Gate Project has had the most dramatic impact. Led by Italian architect, Renzo Piano the project was a radical reimagining of the principal entrance to the city. It took many years of wrangling and the injection of some serious EU funding to finally make it happen but, it really has given the city a new lease of life.

The old bus station, the first thing you used to encounter as you drove in to the city, is gone and the grand fountain, once swallowed up and blackened by the chaos of traffic, has been restored to its original glory as the focal point of a wide, inviting piazza. This marks the now pedestrianised route in to the city, following a bridge over landscaped gardens across the bastion walls. It leads you in to an inviting boulevard flanked by the limestone clad, angular shapes of the new Parliament building, the centrepiece of Piano's vision. Its smooth lines are broken by intriguing, irregular blocks of 'eye-lid' openings in the stone. The design caused much controversy both for its visual concept and the ever escalating cost. Locals, not without a hint of sarcasm, call it the 'cheese grater'. Modern design is often divisive of course but, personally, I love the way it contrasts, yet compliments, the surrounding buildings. Adjacent to it, rising from the ruins of what was once the Royal Opera House (destroyed by Stuka dive bombers during WWII and subsequently used as a car park), there is now a magnificent open air theatre, pinned in place by the original Corinthian columns of the Opera House. Opposite, a row of beautiful, traditional Maltese buildings with their characteristic painted wooden balconies. Collectively, they set the tone for exploration of a city famed for its multi-layered history but with its sights very much set on the future.

Having seen off the invasion of the Ottoman Turks in 1565, for the next 268 years the Knights of St John prospered and, as the money rolled in, the city of Valletta was built within the safety of the fortified walls to rival other grand European capitals. The legacy is a city literally stuffed with fine Baroque buildings and prestigious palaces.

Many of these buildings have now been skilfully converted for more modern purposes, in particular, as boutique hotels and restaurants. Malta as an island has many notable charms but it never had a reputation as a destination for foodies. That too, has changed dramatically in recent years - so much so that there is now a Michelin Guide to Malta. The 2021 edition lists 31 restaurants in total including five, one star restaurants and three of those are in Valletta.

I was fortunate enough to be invited to dine at the latest addition to the Michelin constellation, ION (as in Eye On) The Harbour, the in house restaurant at super stylish Iniala Harbour House & Residences, the place to stay and be seen in Valletta right now. The restaurant is on the top floor with a lovely wide terrace for al fresco dining offering panoramic views of the city's historic Grand Harbour. It is the priciest restaurant on the island with a 6 course tasting menu at €175pp. That price tag however reflects the extraordinary culinary magic of visiting Chef in Residence Alex Dilling (formerly of 2 Star The Greenhouse, Mayfair). Every exquisite course was delivered with a detailed explanation of its mind blowing complexity - including Alex's signature creation 'Hunter Chicken' a glazed, boneless stuffed Landes chicken wing served with Alba white truffle and a Daikon salad roll - stunning to look at and sublime to taste.

Just like its restaurant menu, Iniala Harbour House & Residences ooze class. The bedrooms each come with eclectic design concepts that echo Valletta's heritage and charm and, without doubt, the most stylish, yet practical hotel bathrooms I've seen in many years. The hotel is located on St Barbara's Bastion and occupies four original neighbouring Maltese houses. There are currently 23 rooms but plans are afoot, I am told, to extend into adjacent buildings. A new Spa and heated pool down in the ancient vaults below will be opening very soon and the hotel also offers the option of customised day trips for up to 8 guests on board its 44ft luxury yacht moored up in the harbour.

10 minutes walk away from ION, another Michelin Star dining option is Noni, the nickname of its Chef and Owner, Jonathan Brincat. Sadly it was fully booked when we were in town but when asked, literally every local I spoke to cited this as a their favourite restaurant in the capital. Always the best recommendation.

The third star belongs to Under Grain, an atmospheric cellar restaurant located in another boutique hotel, Rosselli on Merchant Street. Again the restaurant was fully booked but I was able to have a quick look around the hotel, a stunning contemporary conversion of a Grand Knight's 17th century home. The pure white walls and louvre clad archways of the dramatic 4 storey atrium create an instant wow factor and the hotel also has the advantage of a roof top lounge and bar with a small (ahem read, tiny) plunge pool.

I stayed at the Domus Zamitello hotel, a charming, more classic style renovation of another 17th century Palazzo. Just steps away from the City Gates and Parliament House, it has the most fabulous location with a lovely terrace bar overlooking the Pjazza Teatru Rjal open air theatre. When we were there rehearsals were underway for an upcoming orchestral performance - check the website to see what's on if you want to time your visit to catch a show. The hotel's brasserie restaurant, Mezzodi has a Bib Gourmand ranking and I can vouch for the quality of the a la carte breakfast. The trump card though is the delightful staff - even behind the still compulsory covid masks, they were super helpful and always happy to chat.

The Phoenicia, the grand dame of Valletta's hotels is also still going strong. A member of the Leading Hotels of the World group, it's the traditional, 5 star classic choice. Sitting just outside the city walls, on the edge of the new piazza, it has the advantage of more space and the bonus of beautiful, flower filled gardens leading down to the large infinity pool. There is also a large Spa and indoor pool.

There is no doubt the Michelin seal of approval has raised the gastronomic bar in the capital - young, ambitious chefs and enterprising business owners are keen to compete and make their mark. You will find them honing their craft in the smaller wine bars and more casual eateries, tucked away in the side streets within the city walls. Places like Trabuxu, The Bridge Bar and Cafe Society - all big on atmosphere, serving exceptional local wines and great food to boot.

Farm to table dining is a recurring theme as well as a passion for keeping traditional recipes alive. Like nearby Southern Italy with its 'cucina povera' these dishes tend to be based on a few simple, readily available, ingredients. Fresh fish, naturally features everywhere, but also rabbit, snails and, of course, a wide variety of locally produced cheeses, cured meats, fruits and vegetables.

Beyond eating and drinking, there's no shortage of other distractions in the capital. Illustrating the island's fascinating history dating back some 7000 years, there are plenty of museums to provide the context and details, wonderful art galleries like MUZA and 'must see's' including the lavish interior of St Johns Co Cathedral housing two Caravaggio masterpieces.

Malta is only 17 by 9 miles so, when you feel the urge to explore beyond the city, nowhere is more than a taxi ride away. If you only have time for one foray, make it to Mdina, the medieval capital of Malta. After the seat of power moved to Valletta, it became known as the Silent City and is, to this day, a delightful place to stroll around the narrow, side streets and soak up the unique atmosphere. Its also home to another of Malta's Michelin Star restaurants, De Mondion located in Mdina's only hotel, the Relais & Chateaux Xara Palace. Maltese born head chef, Kevin Bonnello was a driving force in bringing Michelin to Malta. In warm weather be sure to ask for a table on the terrace, perched high up on the city walls and offering wonderful panoramic island views.

Last but not least, it would be shame to visit Malta and not get out on the water. Staying in Valletta there are endless options for day trips by boat whether its a hop across to the Three Cities on a traditional wooden water taxi, a private yacht charter out to the sparkling turquoise waters of Comino's Blue Lagoon or the fast ferry (45 mins) that will take you directly from the capital to neighbouring Gozo.

With its complex layers of history, traditions and local culture sitting alongside contemporary design, fine dining and luxury boutique properties, Valletta these days is seriously cool. Add an average of 300 days of sunshine and a long season from March to November and it has all the requisite ingredients for a memorable city break. If, like me, you've not been for a while, these quieter post pandemic months are an ideal time to revisit.

Cathy travelled as a guest of Visit Malta to film video content. 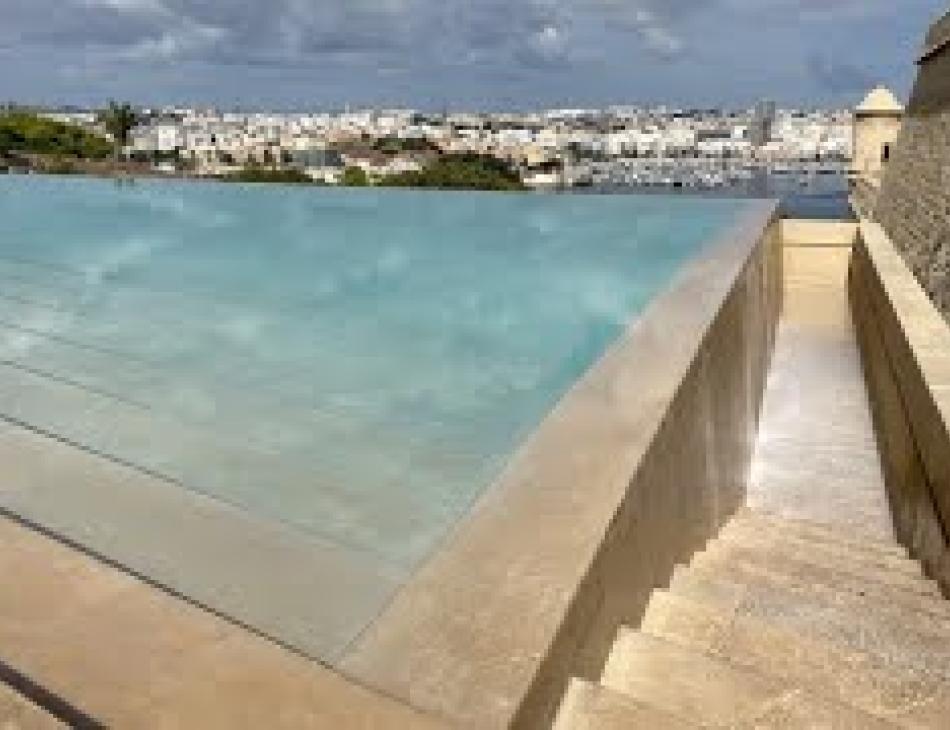