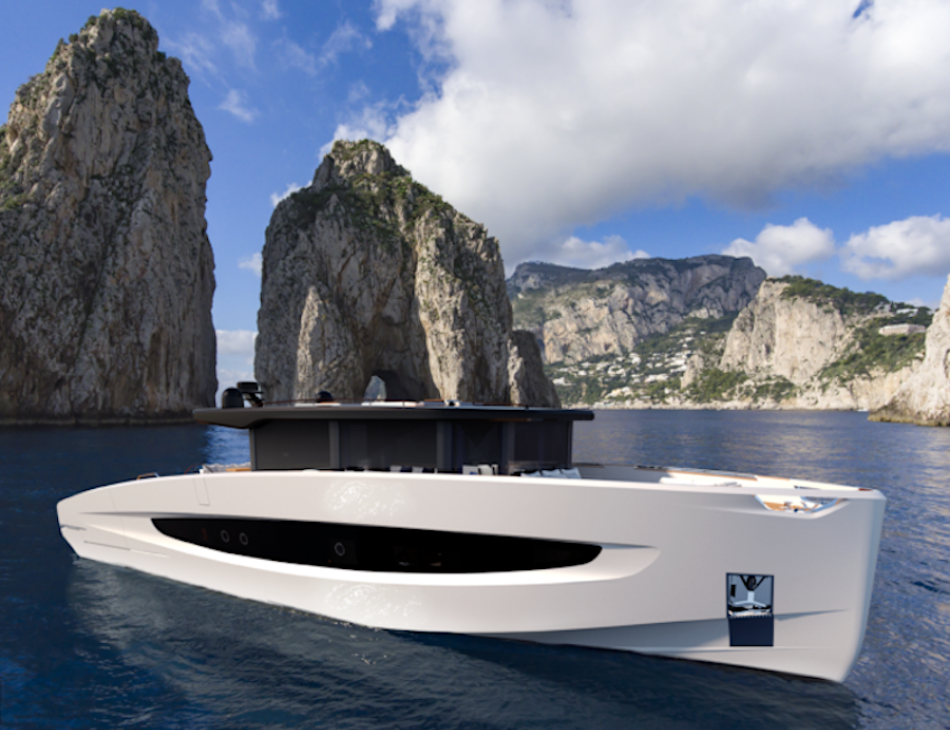 Evo Yachts’ exclusive new flagship, the 24-metre yacht initially known as the Velar 78 concept and today officially named Evo V8, is the first model in the new V line and a highly original proposal that will amaze the market with all its innovative features.

With its understated and refined design, this extraordinary model has been developed to offer an unprecedented onboard lifestyle and an alternative to anything seen before, marking a clear break from the stylistic imprint of its predecessors in order to offer a new interpretation of life at sea.

Evo V8 is a boat designed to excite and amaze, like a Russian matryoshka doll hiding multiple nested surprises. And while the designer and shipyard promise to reveal all these secrets when the yacht is officially presented at the Cannes Yachting Festival 2021, some first glimpses can already be seen in the newly released renders of the vessel.

For Blu Emme Yachts, the shipyard behind the fortunate Evo Yachts brand, the realisation of this model and a new product line represents a major watershed. With a design penned by Valerio Rivellini, Evo V8 springs from the desire to find the point of intersection between suggestions from the two worlds of sailing and motor yachts, with the aim of taking the best of both and revolutionising the cruising experience.

The project is an invitation to see life on board as a time for socialising and relaxation, even when cruising under power at high speed. As the designer explains, “motor yacht lovers begin their holiday when they reach their destination, either at anchor off the coast or in port, whereas sailing yacht owners start their holiday right away, as soon as they step on board. Evo V8 combines the speed of a motor yacht with the comfort and relaxation of sailing”.

One of the main results of this mixed approach is the fact that there are a remarkable four helm stations. The first station on the Main Deck forward of the main salon and the second on the Roof Top, fitted with a retractable steering console, are joined by two yacht wheels on the port and starboard sides of the Main Deck. A clear reference to the world of sailing, they are an invitation to enjoy cruising in close contact with the water, as well as being very practical when manoeuvring. The space between the two helm wheels is completely free, but the side seats and the couches around them invite socialisation between the driver and their guests, something that isn’t usually possible on a motor yacht.

The particularly innovative layout of Evo V8, which sets it apart from other boats on the market in the same category, is even clearer to see in the beach area, which can be provided with direct access from the master stateroom at the owner’s request.

The beach area is an open space on the water, just 70 cm above the waterline, designed to be able to enjoy seamless contact with nature and an unbroken 180-degree panoramic view thanks to hull sides that open, eliminating all visual barriers and conveying the sensation of being at one with the surrounding environment. Three steps connect the beach area with a low lounge area that precedes the master stateroom and has big sliding glass doors, allowing it to perform two functions: an open air patio for daytime use, separated from the interiors and offering shelter from the wind and sun, and a private living area for the owner at night, when the door to the exterior deck is closed, transforming it into an exclusive open space suite 12 metres long.

The particularly innovative layout of Evo V8, which sets it apart from other boats on the market in the same category, is even clearer to see in the beach area, which can be provided with direct access from the master stateroom at the owner’s request.

Evo V8 has a fully customizable layout, with two different stairways leading from the Main Deck directly to the Lower deck, so that the crew and guest flows can be kept separate. The first unit has three cabins sleeping seven and a cabin for the crew of two. The Lower Deck contains the master stateroom, two guest cabins and a crew cabin. On the Main Deck, the spacious salon with a dining area is surrounded by big windows that can be lowered almost entirely for even more contact with the outside environment and to limit the use of the air conditioning: an option that makes Evo V8 even more like a 24-metre open with hard top.

Evo V8 will be launched in the coming months and handed over to the Italian owner, a frequent customer and a fan of the Evo Yachts brand.