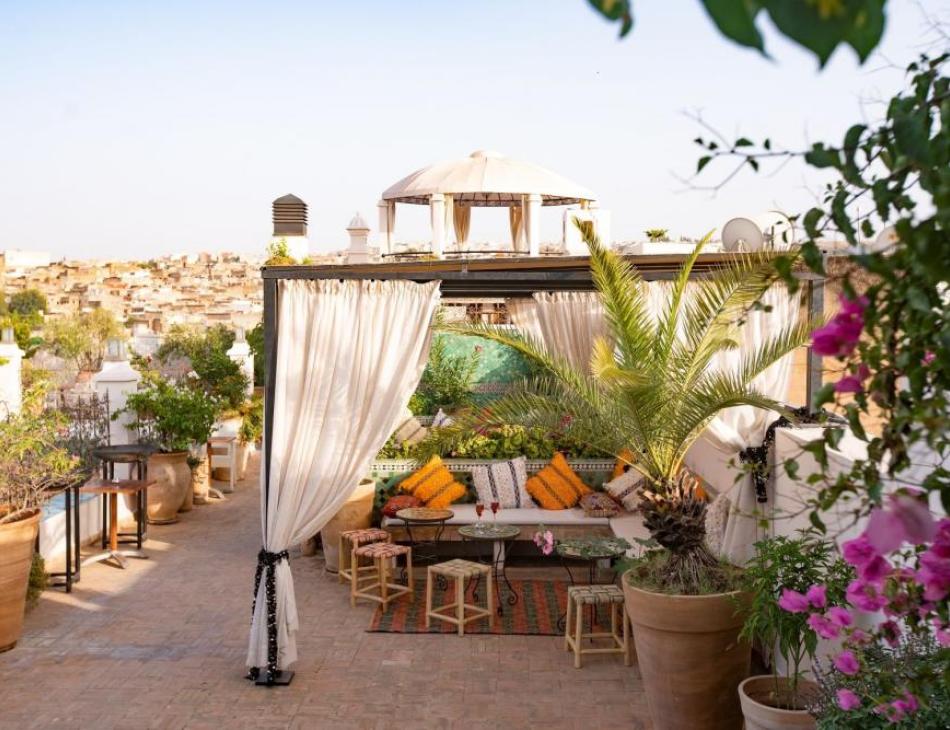 Fez is Morocco’s second largest city but looking at the airport’s route network over the last 20 years or so, visitors wouldn’t know it. With the arrival of budget airlines and a refreshed larger airport, Fez was now more open as a city break destination. But before this growth, a couple from London, had already built and developed the city’s leading hotel, Palais Amani which opened its doors in 2010.

‘While passenger numbers were up less than 1% in 2016, in the first four months of 2017 traffic had grown by 13.6%’ (ref – anna.aero) and traffic continued to grow. By now, Palais Amani was open as an affordable luxury hotel home to a restaurant and hammam, also open to non-residents and to a rooftop lounge area with bar offering stunning 360’ views of Fez. Then in 2018, Palais Amani unveiled the Fez Cooking School which became the city’s leading cookery school.

Jemima Mann-Baha first visited Fez as a 15-year-old on a family holiday back in 1979 when the words ‘budget’ and ‘airline’ were never used in the same sentence. At this time, Morocco was far from a leading tourist destination and the country remained a tourism mystery for many. Jemima returned again in 1987 and later with her husband Abdelali who was born in Fez.

In 2006 Jemima and Abdelali bought the former home of one of Fez’s most prominent families, which had laid abandoned and deteriorating in the heart of the medina for over a quarter of a century. Four years of extensive renovation restored the property to its old splendour and revealed many stories about family, heritage and legacy. The renovation included the maintenance of art déco features dating back to the 1930s.

Prior to Fez, the couple had lived in London where they ran a restaurant and raised their three children. In the mid-1990s they took over the running of the family restaurant Twenty Trinity in Brixton. This had been opened by Jemima’s mother in the early 80’s which at the time was a pioneering choice: despite much scepticism, Twenty Trinity Gardens became one of the first authentic independent gourmet destinations in south London. Jemima had worked there part time during her time at university. But with the economic crisis in the late 80’s, like so many success stories, it was struggling to keep open. In the 1990’s when Abdelali and Jemima took over the running of the restaurant, it was a long uphill struggle to save. Despite that they saved it from bankruptcy, and sold it on in 1997, moving to outside catering and events management. For another 10 years in central London.  A decision to change countries, and a yearning to go back to his origins, meant that in 2006 the couple took the plunge and invested in a dilapidated building in the ancient city of Fez, home to the first ever university in the world.

Palais Amani arrived and lifted the lid on authentic Moroccan life in the country’s second city. Today there are 18 individually designed bedrooms, Eden Restaurant and rooftop bar, a Hammam offering traditional rituals and the Fez Cooking School. Authenticity has remained at the core of the hotel’s growth and Jemima created packages and experiences that highlight and celebrate Moroccan life to the visitor. These experiences include courses in calligraphy, book binding classes, Moroccan wine tastings and foodie tours of the medina with one of the hotel’s chefs.

Palais Amani remains family-run and now employs 50 staff. The hotel has won several industry awards and welcomed guests from around the world and it showcases Moroccan craft and design throughout.

From the start Jemima and Abedel wanted to show a commitment to the city they fell in love with. They employ all locally. In the 10 years Palais Amani have been open, the number of local staff have increased from 16 original members to the 50 today. All fully declared, Palais Amani estimate their salaries alone maintain a local community of 500.

Palais Amani buy local to very local…the medina is vast and filled with produce but Morocco itself produces everything the hotel needs. Palais Amani source local or national products wherever possible, to reduce the carbon footprint to a minimum for our supplies. In the last ten years Palais Amani have contributed over 1 million Euros to the local community in buying local.

The hotel is also strong on recycling and giving back and does this in a genuine and effective way. The tired bed linen is reused for making shopping bags, hand towels reused as cloths and cleaning supplies. Palais Amani operates a ‘NO to single use plastic’ policy: their pledge for this anniversary year, is to work on all possible ways to eliminate single use plastic. 2020 will see the arrival of a new water filtration system. Sustainable drinking bottles for water instead of plastic bottles, packed lunch packaging is biodegradable, glass lidded plates to display biscuits and recycled bottle amenity dispensers have been installed. The hotel has also unveiled «Give Back» bags which are left in rooms should guests wish to lighten their luggage load; any unwanted clothes and shoes are given to local charities. Palais Amani support a number of local charities installing water, supplying education and working on the replanting of trees.

Jemima and Abedel have set up their own fund that allows the hotel team to share the magic of travel, by funding their discovery of the world.

Each district in the medina specialises in a certain craft. With Palais Amani being set on the edge of the oldest part of the medina it is the most convenient location for the crafts district. The hotel provides visitors with an invaluable little black book of contacts for those wanting to come and source beauty for their homes inspired by Palais Amani and Morocco. Palais Amani have contacts with the leather works for skins, large stools and a multitude of leather covered household items. Stunning pottery that is both affordable and diverse can be sourced just a short walk from Palais Amani as can copper works including intricate lace copper work for light fittings, trays, mirrors, tables and more. All can be created in a bespoke made-to-measure way.

The Imperial City of Fez has stood in the north of Morocco for 1,200 years. Walking inside the walls it’s easy to see its history; out of the four major Moroccan cities, this is easily the one that has the strongest connection to the past. A fourteenth century mosque stands close to a Moorish estate built in the 1700s. Mourners trek daily into the ornate tomb of Moulay Idriss II and the oldest continuously operating university in the world, al-Karaouine, lies in the north-east of the city.

It’s in the UNESCO Medina – Old Fez, the world’s largest car-free urban area – where the city’s heritage is most obvious. You can easily get lost in the twisting, labyrinthine streets, both literally and figuratively, but this is undoubtedly the best way to discover the true heritage of Fez.

Jemima comments: “We believe that travel is more than discovering new places, it’s unearthing the stories that inspire us to live a little more compassionately, healthily and to listen to our inner spirit.

We help you do that by opening the door to a world that will restore, enrich and amaze you”.

A perfect spot to enjoy the sunshine or read a book or enjoy a cocktail before dinner by the bar. The roof terrace offers wonderful views of Fez and has many quiet corners with sun loungers and larger seating areas. A rooftop bar is open throughout the day and in the evening; there are cocktails to enjoy.

Start with a guided foodie tour of the medina followed by a cookery class at this purpose-built cookery school on the far side of the hotel’s roof terrace. Guests can learn to cook a selection of Fassi, Moroccan or Sephardic dishes.

Eden Restaurant at Palais Amani offers 'Market Moroccan' local produce. Here diners can enjoy Moroccan signature dishes from an a la carte menu along with a weekly changing three-course bistro menu. A diverse tapas menu is also available daily. Diners have the option to dine in the outdoor hidden paradise under the majestic citrus trees for a truly unforgettable culinary adventure.

A separate space combining literature, board games and a light menu of local snacks and drinks, The Library Bar is open throughout the day and in the colder months an open fireplace is the ideal place to curl up by with a book or magazine.

Each of the 18 bedrooms and suites is completely different both in design and layout. The Classic Rooms are cosy offering discreet views of the garden or medina. The second category of rooms is the Luxury Rooms, which combine a seating area and bedroom with stunning large windows and doors. The Junior Suites have a master bedroom, elegant salon and bathroom and can accommodate an extra bed so can sleep up to three. The Senior Suites offer an additional single room and the minimum dimensions are from 45m2 and include a salon and dedicated dressing area. Finally, The Grand Suite; this unique splendid room covers the whole 100 sq./m of the south wing. The suite includes a salon, a his and hers dressing room, spectacular bathroom and includes breath-taking views of the gardens and hills beyond. All rooms have their own fragrance and feature local beauty products and a selection of water and wines. Room service is also available.

A large garden of 600m2 is at the centre of the palace filled with orange trees where birds, permanent residents here, provide the birdsong in this tranquil haven.

The hammam is designed in true Moroccan style complete with a hot room, an exfoliation room, separate showers and a luxury relaxation chamber. The ‘Royal Hammam’ treatment lasts 1 hour 15 minutes and transports guests into the ritual of purification not found outside of this fascinating country.