The Relais Henley Hotel On The Thames Review 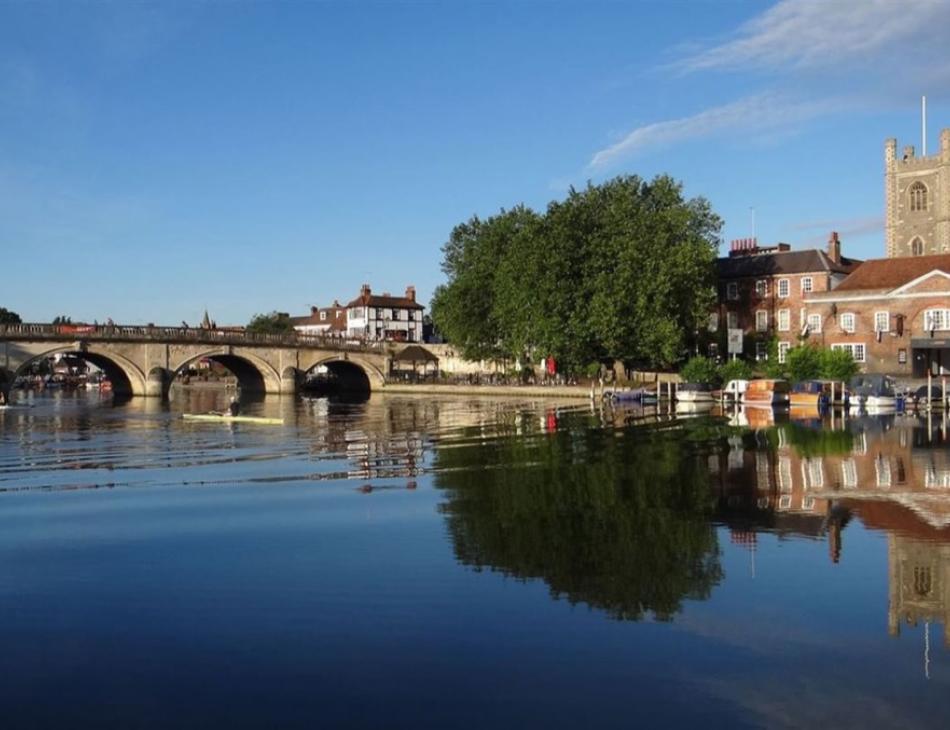 The Relais Henley is a stylish new waterside retreat in Henley-on-Thames. There’s just something about riverside hotels that is gloriously appealing, particularly in England. In the old days, you could always find something wrong about a hotel, but a new breed has emerged that just gets everything right from the get-go and the Relais Henley is just such a place.

This 16th Century coaching Inn has been completely restored by international hotelier, Grace Leo, with 30 new rooms and suites inspired by Henley’s rowing heritage and marvellous landscapes. Less than an hour from London The Relais Henley also offers The Clipper Restaurant in partnership with Mosimann’s, the prestigious private members club in Belgravia. There is a choice of indoor and outdoor dining, set right next to Henley Bridge with its five marvellous elliptical stone arches, built-in 1786.

The hotel used to be The Red Lion Pub before its substantial renovation by new owner Grace Leo, part of a new series of hotels under The Relais Retreats Brand. Rather a lovely name that evokes the Grand Tours undertaken by young European nobles in the early 17th to 19th-century. A return to the era of coaching Inns and glamorous travel that focused on absorbing the art, music and sophistication of different cultures.

Historically the inn goes back to 1530 when it housed the craftsman who built St Mary’s church. Subsequently hosting King Charles I in 1632, Prince Rupert whose Royal Coat of Arms are preserved over the fireplace in room 108 in 1642 and the 1st Duke of Marlborough, his regular stopover on the way to Blenheim Place. King George III had breakfast there with his wife Queen Charlotte, Queen Wilhelmina and Princesses Augusta and Elizabeth, whilst George IV, famous for his gluttony, devoured 14 chops there in a single sitting. Princess Grace Kelly also stopped by when her brother Jack raced in the Diamond Sculls at The Henley Royal Regatta, which he won.

The entrance is suitably imposing with a grand portico entrance and parking outside. Walking into the lobby is a comforting, reassuring experience with rich green carpeting, gilt pillar, ornate lanterns, fine bone china and muted brown-gold wallpaper. Reception is a small ornate oval desk but the greeting was large, warm and welcoming. The friendly receptionist knew who I was as I walked in, always flattering, so I immediately felt at home.

Up a couple of steps to the left is the rather plush new Quarterdeck Bar, with its original mid-16th century wood beams, velvet sofas and neo-modern seats lining the wall. Definitely, a place I could lose an entire evening in with little encouragement. I was not alone in thinking this as attractive groups and couples were clearly settled in for the long haul. An imminently seductive and chaleureux spot, already popular with the local gentlefolk.

For something a little more formal try the Clip Bar with its restored wood panelling, deep comfy leather armchairs, fireplace and view of the Thames. A sumptuous place to take tea in the early evening as the sun sets before moving on to a few fortifying G&T’s.

Jonathan, the Relais Henley manager, is a splendid chap, personable and charming with a clear passion for the hotel, its history and the local area. I was treated to a delightful tour of the nooks and crannies, different club rooms and private dining halls. The interior decoration throughout is daring and unique with Persian oriental carpets blended with fine bold English wallpaper and an eclectic mix of luxurious traditional and modern furniture.

The receptionist helped me park my car outside and then escorted me to my room, a lovely kingsize with a magnificent panorama of the river and Henley Bridge. My room had a lovely bottle of Mosimann’s bubbly cooling in an ice bucket plus a timely platter of chocolates with ‘Welcome to the Relais Henley’ in calligraphic chocolate. A boon after touring the bucolic, rural Oxfordshire countryside in the superb Audi TT RS. I took a quick shower to freshen up, pulled on the Gieves and Hawkes and went down for dinner.

The Clipper Restaurant by Mosimann’s is a lovely balance of formal English dining room and country inn, relaxed and charming. Named after the lovely varnished wooden clipper that hangs suspended from the high ceiling, imparting a nautical ambience. High backed ornate floral chairs and sofas provide comfort and conviviality in equal measure. The menu offers surf and turf to suit any palate, so it was a fight between the potted south coast fish, the ham hock lilliput caper terrine and the hand-cut tartar to start.

The soft, fresh and rather superb tartar won in the end followed by a lip-smacking bouillabaisse with salmon, cod, mussels, tiger prawns and toasted focaccia that was succulent and rich with a multitude of flavours. Though I could equally have gone for the sauteéd fillet of beef Bordelaise with bone marrow, baby onions, sweet red bacon, braised red cabbage and grain mustard mash. Next time.

As Santa had only just finished delivering his goodies I finished with the Christmas pudding; sweet creamy fruit with a dollop of homemade vanilla. You’re probably assuming that I was by now loosening my belt buckle, but the food was subtle, locally sourced, delicious and sensibly proportioned. All washed down with some Mosimann’s Champagne and some crisp, dry Chablis. A very relaxing venue to meet friends, dine well and put the world rights over some great wines.

The rear of the hotel lies parallel to the river and possesses even older buildings that surround an inner courtyard, accessed via splendid towering wooden gates that would once have received the coach and horses of wealthy travellers on their Grand Tours to Italy and France. That reminds me, If you are peckish while touring don’t miss The Deli off to one side of the hotel with its marvellous pastries and gourmet sandwiches. An ideal accompaniment to a foray into town or a picnic along the River Thames.

There are so many things to do and see in Henley. Nearby you have the Leander Club, one of the oldest rowing clubs in the world and opposite The Angel on The Bridge pub. Plus the Chiltern Valley Winery & Brewery, Grey's Court, Henley Royal Regatta, the River & Rowing Museum, Fairmile Vineyard’s, Henley Women's Regatta, Henley Market, plus numerous bars and late night clubs. Or just tour the lush and verdant countryside in a high-performance supercar.

This is a quintessentially beautiful English riverside hotel with excellent service in possibly the most desirable town in England. It should be on your list if you’re touring the area with friends or simply want to visit Henley for a weekend break or romantic liaison à deux. The Relais Henley is closely linked with Hobbs distillery down the road that produces fine gin and rent boats to potter about in the water. The Relais is a boon for the residents in Henley, an upscale bar and restaurant to lounge in with terrific food and fine wine at a good price. Also a superbly located pied à terre for anyone passing through the town.

They’re doing an introductory offer of 15% off the restaurant on the website, so well worth visiting now.

Rooms start from £190 per night based on two sharing a Courtyard Room, including breakfast.