Road trips are the best way to see the country and get to know the finest luxury venues. 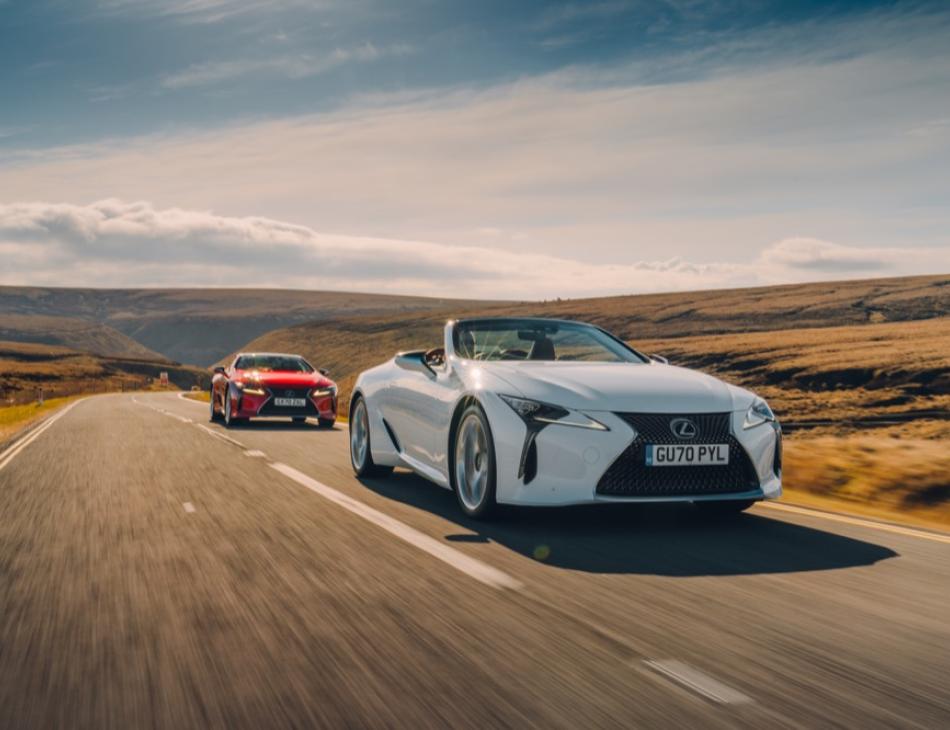 We reviewed and loved the Lexus LC 500 so with UK road trips now possible and staycations on the agenda for the coming months, here are some spectacular driving routes to enjoy this summer in the Lexus LC 500 with the top down. From Land’s End to John O’Groats, via sweeping bays, soaring cliffs and rolling fells, there are great roads to enjoy.  To provide inspiration, here are some gorgeous shots of the LC Convertible and the LC 500 coupe touring in the Lake District, on Snake Pass and in the Mam Tor area, where the driving experience and the views are breath-taking.

Kendal to Keswick
Cumbria, England
Enjoy the best of the Lake District in one 38-mile drive via the A591, which runs along the banks of Windermere and Thirlmere, then the cloud-grazing Lakeland fells, through countryside that has inspired artists and writers. The village of Grasmere is perfect for a pit stop.

Cheddar Gorge
Somerset, England
See Cheddar’s soaring limestone cliffs along the twists and turns of the B3135. This 18-mile route will take you past craggy bluffs from Bridgwater to the Cheddar Gorge.  Take the A372 east from Bridgwater, then the A361 north-east, before joining the B3131 and on to the B3135.

Ribblehead Viaduct
Yorkshire, England
Enjoy the beautiful Yorkshire Dales from the village of Hornby to the Ribblehead Viaduct, along the A683, A687 and B6255, encompassing wild woodlands, pitted peaks and lush, grassy valleys. This 15-mile trip ends beneath the famous 400-metre-high viaduct, which first carried locomotives in 1875. If you continue for another six miles on the Buttertubs Pass between Thwaite and Hawes you’ll encounter thrilling descents and hairpins.

Snow Roads Scenic Route
Cairngorms National Park, Scotland
You’ll see some of the Highlands’ most beautiful scenery along the A93 from Blairgowrie, which is Britain’s highest public road. Drive northwards, taking the A939 from Ballater, passing towns, crumbling castles and the Cairnwell chairlift (open all year, for skiers and hikers alike). You’ll finish this 89-mile route in charming Grantown-on-Spey.
https://www.snowroads.com/

The Atlantic Highway
Devon and Cornwall, England
One of England’s greatest coastal routes runs between Barnstaple (Devon) and Newquay (Cornwall) along the A39 and A3059, covering 75 miles of glorious beaches, dramatic clifftops and rolling surf. From Newquay you can extend the trip for a further 41 miles by following the A3075 and A30 to Land’s End, the most westerly tip of mainland Britain.

The Coastal Way
West Wales
The Coastal Way is 180 miles long, stretching the entire length of Cardigan Bay. You’ll encounter empty beaches and traffic-free roads with edge-of-the-world views. There are plenty of interesting stop-off opportunities, where you can join dolphin safaris, forest foraging tours, and kayaking. Interesting towns and villages along the way include Cardigan, Aberaeron, Aberystwyth and Aberdovey, reached via the A487.

South West Coastal 300
Ayrshire and Dumfries & Galloway, Scotland
This 299-mile loop starts in Dumfries and features spectacular sea views, medieval castles and plenty of activities to try, from angling to horse riding. The driving is spectacular, including coastal curves and wide-angle stretches. The route can easily be reached via the M74 and M77 motorways and takes in Mull of Galloway, the most southerly point in Scotland, as well as passing through Wanlockhead in the Lowther Hills.
https://openroadscotland.com/2019/great-scottish-…