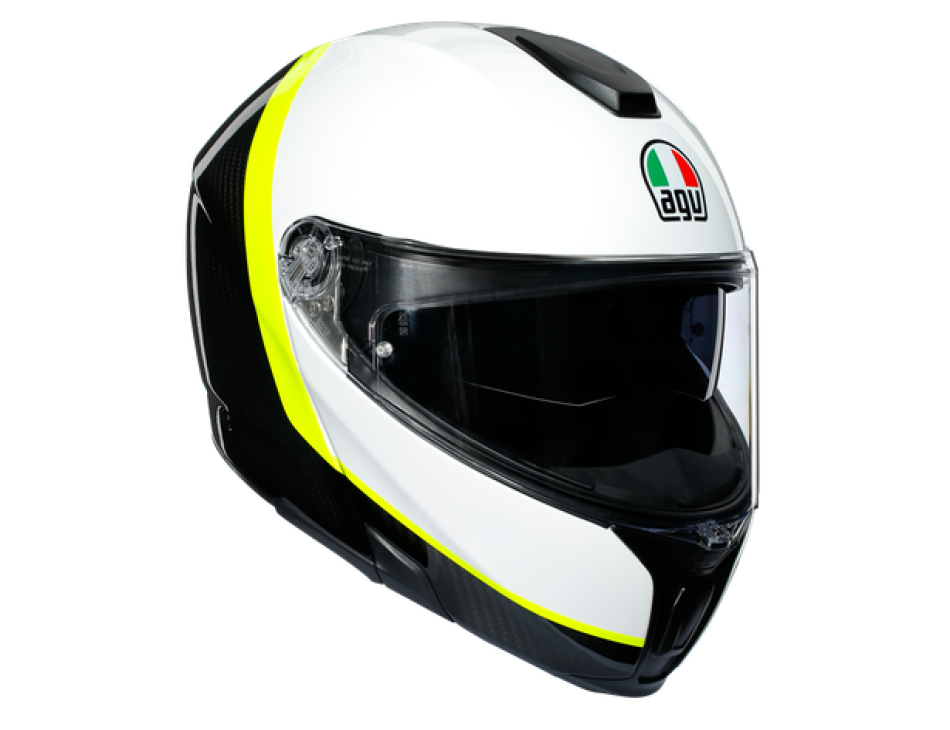 I’ve always used full face helmets, and always sports bike/race style lids. Open face helmets have never really appealed and I wouldn’t consider not wearing one, no matter where I was. When AGV offered to let me try their SportModular flip front lid I was a bit sceptical, but I’m always open to new ideas, so thought I’d give it a go.

There’s a lot going on with the AGV SportModular so lets start with a bit of a run down about the helmet and it’s features.

This is a 100% full carbon fibre shell, even the flip part of the helmet is full carbon unlike many other flip front helmets. This is no easy task, it’s a very complex shape and tolerances need to be tight. The end result is a very strong and light helmet. It has the same impact resistance as a race helmet such as AGVs own Pista GP R (Rossi’s helmet) but with the practicality of a flip up helmet. Another benefit of the full carbon fibre shell is that it looks stunning.

Another benefit of the carbon fibre construction is the weight, or lack of it. AGV have created a flip front helmet with outstanding impact resistance and light weight, just 1295kg (for the smallest size. The bigger sizes will weigh more).

To open the front, there is a simple forward hinging latch under the centre of the chin. This has been designed to prevent accidental openings and is simple to use, even with winter gloves and incredibly strong.

Ventilation is effective and simple too. You have a centre chin vent which works by sliding up to close or down to open, nice and easy, even in winter gloves. You have a centrally positioned vent on the top which again slides back to open and forward to close, nice and easy, and there is an exhaust combined with a kind of flip up spoiler which is supposed to reduce turbulence too. With the vents open, you are rewarded with a pleasant and noticeable little breeze through the helmet.

The visor has AGVs patented multistep visor lock mechanism and patented extra quick release system. This means it locks in the closed position and is opened with a button at the bottom edge of the visir in the centre. You lock the visir fully closed, or in a slightly open position which means as the speed increases, it won’t snap shut on you. It’s also an optic class 1 visor, so the best visual quality there is, and its scratch proof.

You will also benefit from the pinlock 120 which is included with the SportModular, and my helmet was delivered with a tinted visor which is an option. Both are excellent additions. The tinted visor is great for the recent fantastic weather, but as the sun turned to rain, it wasn’t too dark. Changing the visor is simple with AGVs patented multistep visor lock mechanism. It’s simplicity itself to use and very secure. It also has an incredible 190 degree field of vision.

Pinlock is actually a new experience for me but was a bit of a revelation. It’s really easy to fit and is very effective. If you haven’t used it, it’s like fitting double glazing to your visor. There are pins at the edges of the visor and a kind of secondary visor fits on the inside on your main visor, with a small silicon edge to make a seal. The end result is a visor that almost never mists up. It’s a simple but very effective system.

Finally for the visors, in addition to all of this stuff, there is an internal, flip down sun visor. You flip it down by using a simple slider on the left hand side of the helmet, on the bottom edge at the side. You push the little slider back and the anti scratch sun visor drops down. Slide it forward and the visir flips back up. I’ve got a big nose and wear glasses and it was fine. It almost touched my nose, but not quite.

AGV have fitted the SportModular with a fully-removable lining as you would expect. There is a  removable skull cap that can be removed, reversed and replaced, and has a warmer and a cooler side.

To keep your head safe in the event of an off, there is a five-part EPS (expanded polystyrene) insert that provides differing densities at the top, front, rear and sides.

SportModular comes with two chin skirts, so you can create a tighter seal, or remove it altogether. The lining allows for glasses wearers to use the helmet comfortably and there are removable pads by your ears to allow the fitment of an intercom or communication device.

AGVs SportModular is available in eight sizes from XXS – XXXL and in a range of colours and finishes. Mine is the Ray Carbon/White/Yellow Fluo.

What’s it actually like to live with? Well, I’ve used it for a while now in all kinds of weather and on various bikes. I’ve probably covered a couple of thousand miles in everything from heavy rain to glorious sunshine.

Several observations spring to mind. One of them is weight. Despite the integral sun visor and flip front, it’s a light helmet. Saying that, I add weight unfortunately but sticking an action camera to it, and also a Cardo PackTalk Bold communication system. Despite this, it’s still a very comfortable helmet and can easily be worn for hours at a time.

As a newbie to flip up lids, it took a moment to get used to it. I’ve always thought they looked a little odd, but actually they are a great idea.

I was worried I might look a little odd until I pulled up at some lights and a custom Harley pulled up next to me, low, fat back tyre, loud and the dude riding it was pretty damn cool. As I looked over to give him a sheepish nod, I saw he had a flip front helmet, flipped up.

Generally I keep it closed, but when it’s really warm and at low speed, in traffic, I flip it up and it’s great. Also, when I stop or at petrol stations, I flip it up and can talk without shouting to be heard.

I found the flip front easy to open and close, but the visor is a little fiddly with winter gloves on.

Talking of noise, it’s a bit noisy. Not bad but certainly not whisper quiet. You should wear earplugs at speed although I have fitted the Cardo so can’t. I’ll do a separate review of the Cardo shortly for you all.

When all is said and done, It’s a really nice helmet, well made and with some great features. In my experience it was comfortable and practical and I really like it. 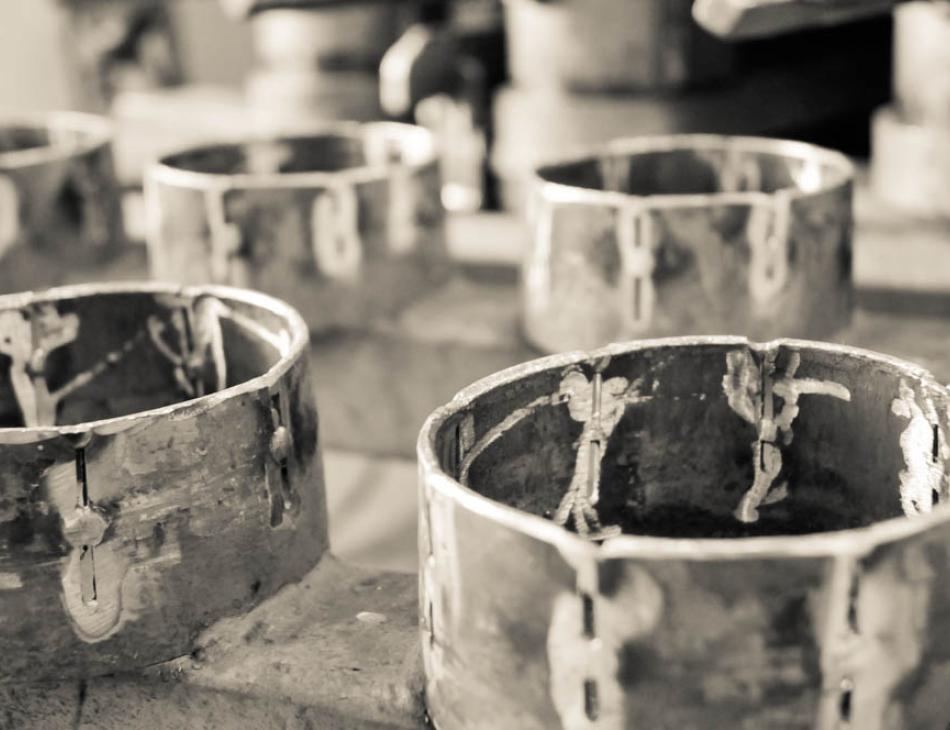 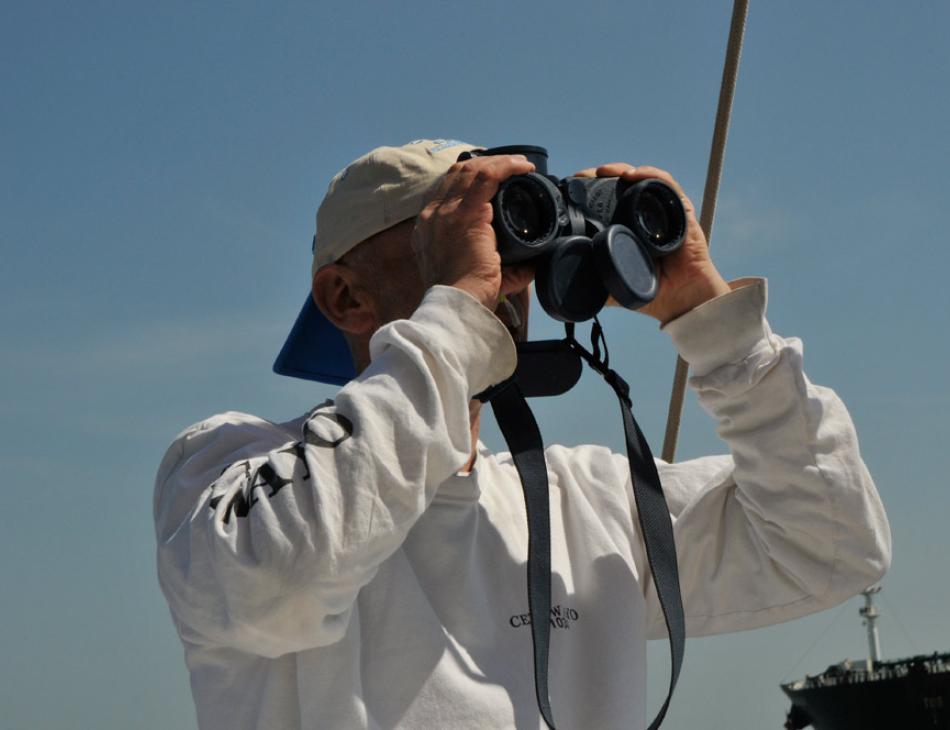 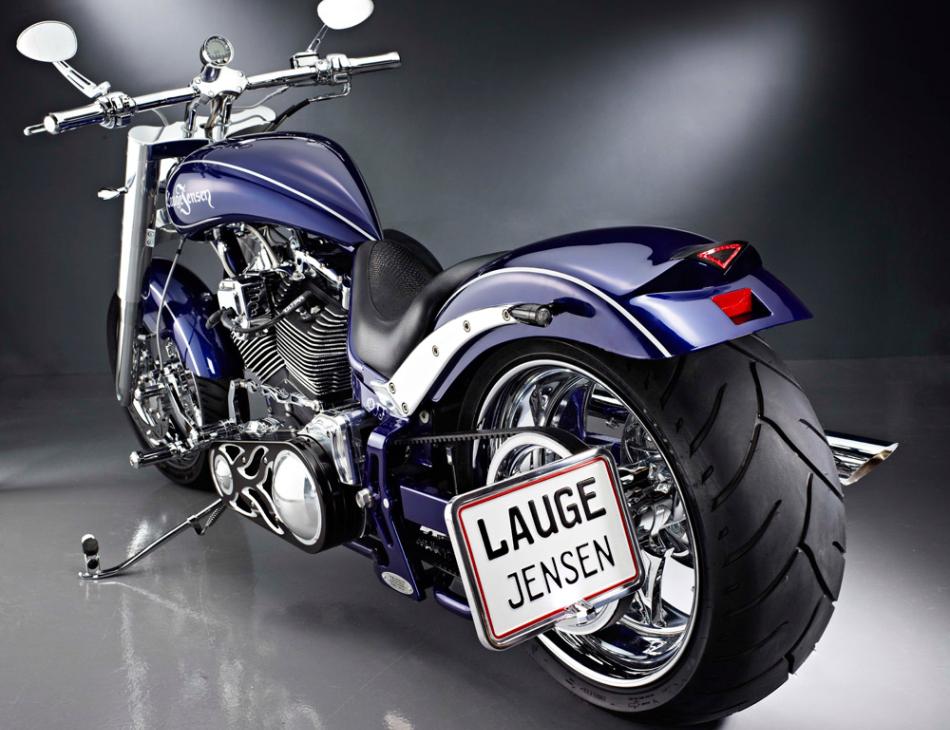 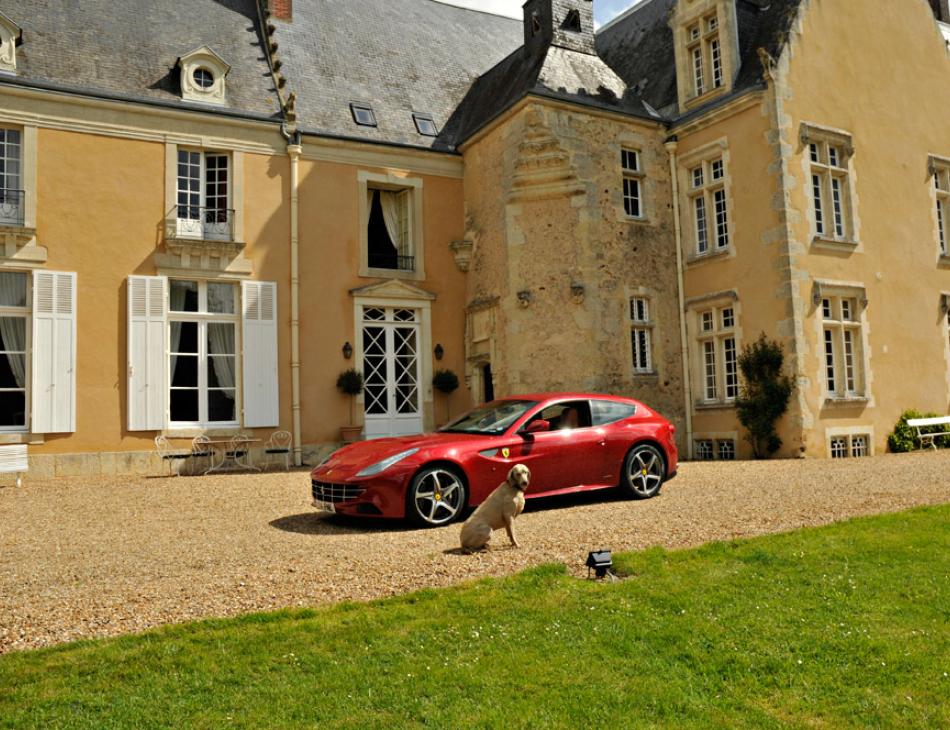 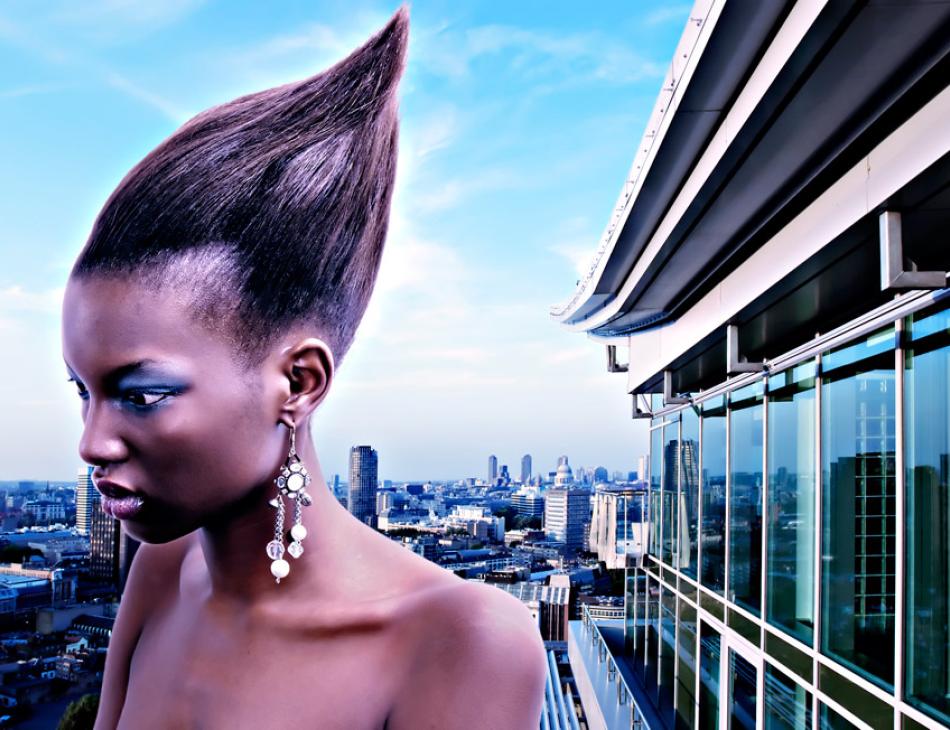 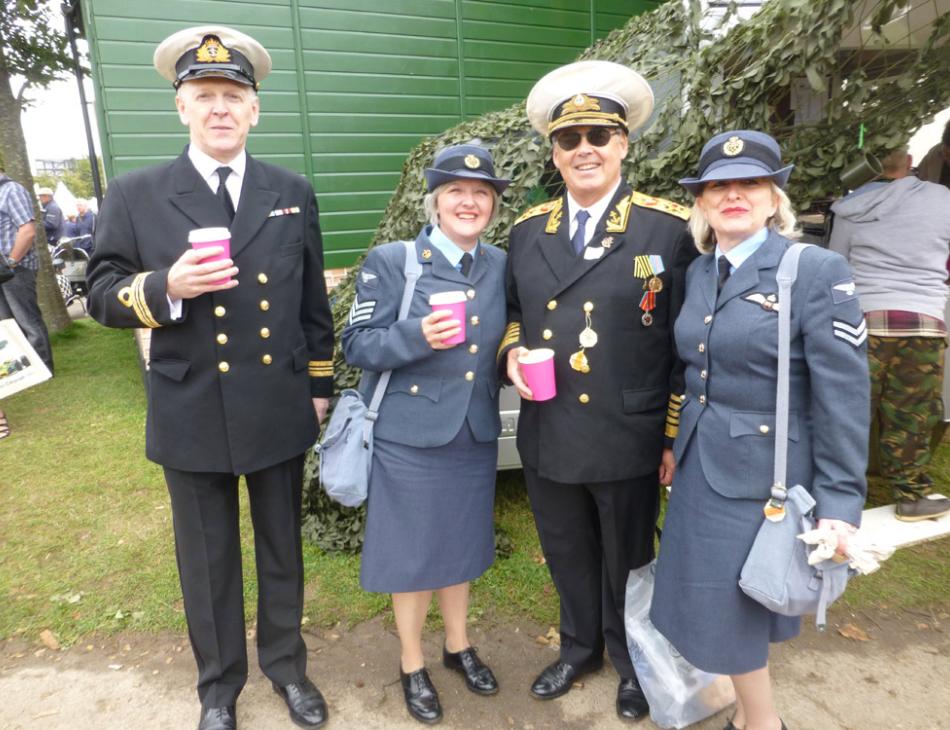 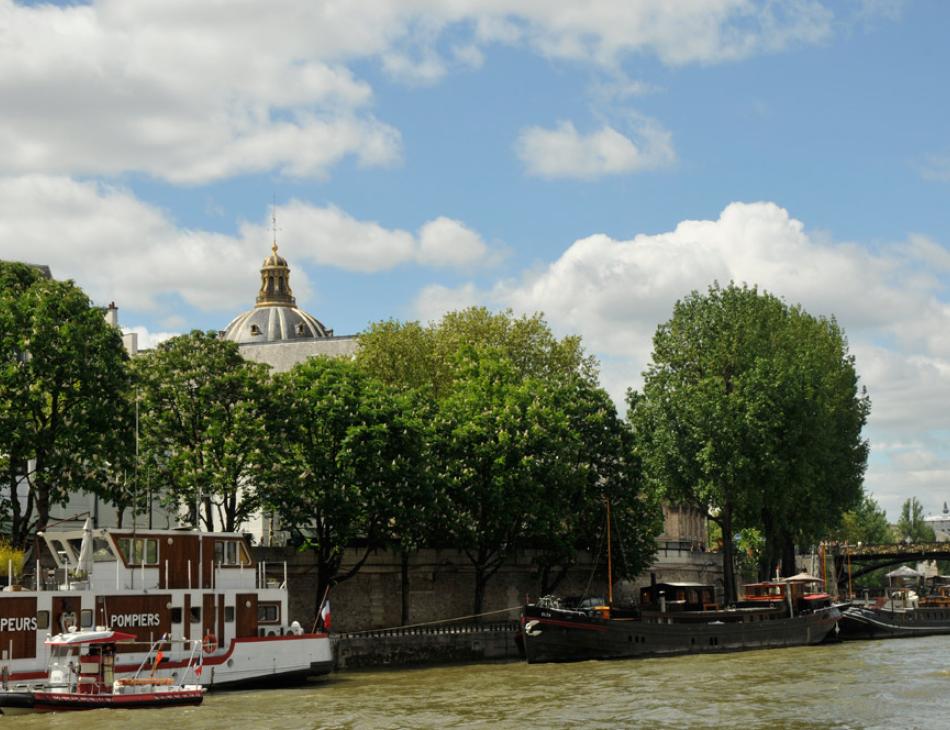