The Balvenie - Made The Traditional Way 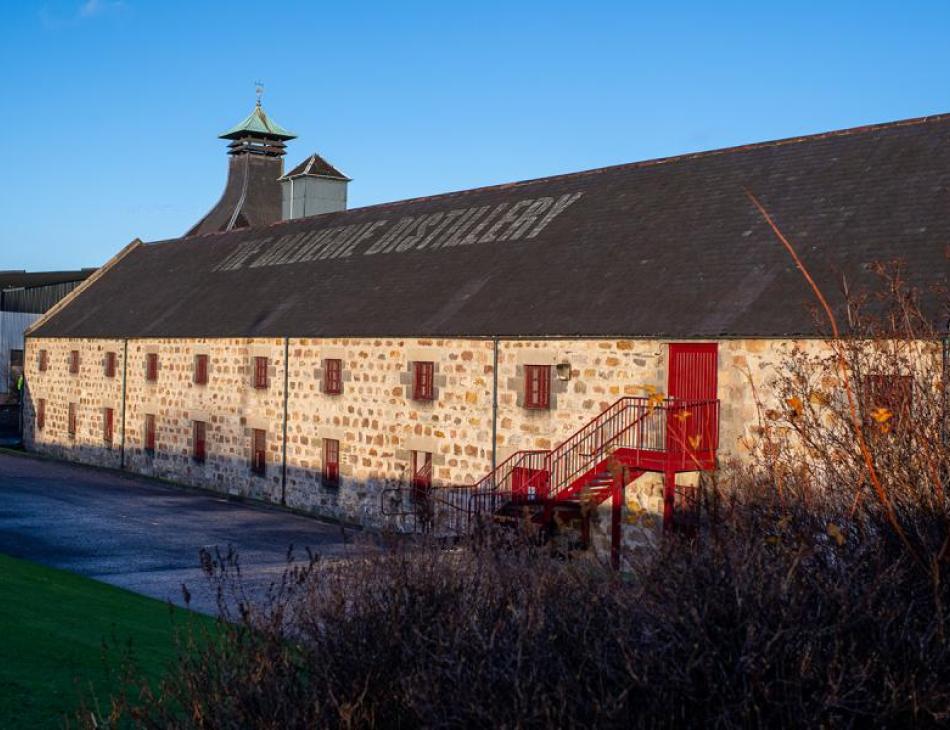 Certain distilleries have become ubiquitous on the shelves of not only specialist whisky retailers but supermarkets. The Balvenie is one of them and with justification. For decades it has been a leading light in Speyside. Located next door to Glenfiddich, yet almost hidden away it is producing some of the most exciting whisky in Scotland, so much so that their Second Red Rose 21 year old was was favourite "normal" expression tasted last year.

I visited in November, a day before a snowstorm swept through the Highlands and would have seen me stranded for a week had I not made a speedy dash for home in Kent. Fortuitously for me, the weather was warm and the sun even shone. In retrospect, I would have been quite happy staying and seeing what adventures I might have found being stranded in the world's most densely populated area for distilleries. Or would that have been dangerous...

I was met by James, one of the distilleries' ambassadors.  I could sense his love for the brand immediately. This wasn’t just a job to ensure all mortgage payments were met, but something he truly enjoyed. He talked with a genuine passion for the brand, which as the afternoon progressed manifested itself through the language he used.

Walking past Glenfiddich and meandering along the pathways that connect the two distilleries, I had a real sense of place, history and sereneness. The small lake, OK, more a large pond, gives a soothing sense of calm. I looked over the almost still water to the iconic stone building that houses the malting floor. Stopping to take photos James and I chatted about how The Balvenie genuinely is a craft distillery, even with the size it is. Can a business as large as Balvenie can be classified as “craft”? I firmly believe it can. Let me persuade you:-

David Stewart MBE started as The Balvenie in September 1962 at the age of 17. He served a 12-year apprenticeship (including 2 as a clerk), where he learned how to make exceptional whisky. To put that into context, my calculations put that at almost 22,000 hours. More than double the 10,000 hours it is generally accepted to take to become an expert in anything. David has become one of the most highly regarded malt masters on the planet. It is interesting to note that during the years of his long apprenticeship there was only one Glenfiddich (also owned by William Grant) and one Balvenie expression, so it was a time for absolute focus.

Things move slowly at The Balvenie, they are not a distillery to jump on the latest bandwagon and expressions like Peat Week may have been in the making for over a decade. Their limited-edition bottles tend to be in the 14–17-year range with some, like the Red Rose, being an exceptional 21-year-old.  Other giants of the industry, such as Dr Bill Lumsden, are frequently consulted.

For obvious reasons, it would be far too challenging to grow all their barley, but a good proportion is from their 1000-acre farm, Balvenie Mains. The farm overlooks the distillery. Here, the only nod to modernisation is the use of a combine harvester, everything else being done in the same way it has been done for decades. The work is overseen by farmer James Wiseman and his son Duncan.

The Balvenie is one of the last remaining distilleries to house their own floor maltings in what is an iconic building. As soon as you enter you feel the sense of scale and the sheer physical labour it must take to turn the barley. This is no small room, but a sizeable, historic warehouse. Prior to being spread on the floor, the Wiseman’s barley is steeped in natural spring water that has filtered down from The Convals (Meikle Conval and Little Conval) above the distillery.

The steeping takes 26 hours before being drained for 23 hours. It is laid out ready to be turned ensuring the correct temperature (around 16C) is reached to allow germination. Robbie Gormley, the maltman will test the grain to check readiness for drying by writing his name with a grain on the floor. If this is just a nod to tradition, and in fact it is done by a moisture meter, I do not know. Regardless, from here the barley is dried in the kiln with just a hint of peat.

It isn’t just David Stewart who has been at The Balvenie for decades, Denis McBain has been there for approaching 60 years! Denis looks after the famed 9 “bell” shaped stills and their mechanics. The stills have pretty much remained unchanged in shape since the distilleries' inception. They allow the vapours to mix and help give the whisky its honeylike notes. It is interesting to hear that the stills are seasoned by placing branches of juniper trees inside for the first distillation. This is known as sweetening the still. Denis is convinced that without the juniper branches a totally different spirit would emerge. It is worth noting that the very first stills were bought used from the Lagavulin distillery on Islay.

One aspect of this distillery particularly excites me -  The Balvenie has its own cooperage. Don’t think for one minute that this is a small room kept operational for marketing purposes. It is a vast area that, to me, looks as big as a football pitch. Looking down from the viewing platform I saw skilled craftsmen - the apprenticeship is 4 years - working on individual barrels with precision and knowhow. The barrels have to be wind and watertight through the use of multiple sizes of staves. It’s an intricate vertical jigsaw - not something that can be picked up from watching a YouTube video.

Coopers at work are fascinating. The speed and accuracy at which they practice their craft is incredible. It is a physical job with each standard ex-bourbon barrel weighing around 50kg. These are manoeuvred by hand providing what must be a good workout every day.

Casks are expensive, so having a skilled team of coopers on site ensures they are well maintained. Through shaving and re-charing, cask life can be extended by years. Maintenance is important, but so is buying the right casks in the first place. I saw a pallet of them ready to be returned as they hadn’t passed quality control.

Enough? I rest my case. These are the reasons why I consider The Balvenie to be a craft distiller. It’s not about volume but about undertaking the craft and being true to the principles that guide that craft. Seeing in person the malting floor gave perspective to the sheer quantity of barley needed. Walking past the kiln, housed in a room where the light was not abundant, conjured up visions of the workers grafting hard in often cold conditions, keeping warm from the generated heat.

The distillery own began bottling under it's own name in 1973, before that it was used in blends. It is joyous that the inherent quality of The Balvenie was noted and the decision made to bottle decided.

But what do they taste like? I am sure you are familiar with the core range, so let's delve into the more interesting expressions.

Vanilla fudge on the nose with strong malt notes. The palate is quite refined with a creaminess and lots of citrus notes with butterscotch.

Quite a delicate nose initially that opens up to show ripe figs, vanilla and oak. The palate has far more depth and presence than the nose suggests. I got a fair amount of clove which left a lovely flavour as if it had been infused with honey.

A beautiful nose full of fragrant warm caramel that has been added to plum nectar. The palate is masterful. Sweet yet dry with tannin. A lovely spice with vanilla and red fruits aplenty. A long finish that takes you on a journey through a forest of wild berries. It has been aged in ex Australian Shiraz casks and was one of my favourite bottles tasted in 2021.

Comprised of 21 casks, the nose is full of toffee and baked apple studied with cloves. A sophisticated palate that shows depth and complexity. Dark marmalade and dried fruits balanced perfectly with vanilla and spice.

A much more powerful nose of honey and smoke but well balanced. Toffee apple and cream soda on the nose followed by tobacco and meat glaze.